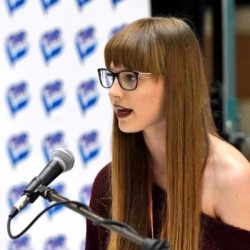 The events of 2020 threw every aspect of life into a whirlwind; work, education, relationships were forced to adapt, and the experience of being a woman in society evolved alongside them.

During lockdown, I’ve been a student, a retail worker, and a Trustee of the Scottish Youth Parliament (SYP), a youth-led organisation that represents the democratically elected voice of Scotland’s young people. As members of SYP, we consult constituents, hold debates, create policy and engage decision-makers with the most important issues facing young people in Scotland, and as Trustees on SYP’s Board it’s our job to ensure the charity keeps running smoothly.

But as you can imagine, SYP was forced to drastically adapt our ways of working. Like many other charities we made the move into online engagement, and as a Board we were faced with the difficult tasks of making sure this transition was as pain-free as possible.

Being a woman in a professional and political environment has never been easy; if you’re too loud then you’re “bossy”, but if you’re too quiet then you’re “weak”. In certain situations, it can take a mountain of courage and self-assurance for a woman to speak their mind, when a man in the same surroundings could do so with ease. I am incredibly lucky that SYP is such a welcoming and inclusive organisation that amplifies female voices; it’s a warm atmosphere that unfortunately not all women are greeted with in their circles.

However, now that organisations like SYP are engaging with members via video platforms as opposed to face-to-face engagement, it can be even more difficult for women to raise concerns to their peers and superiors, making it far more likely that women’s voices will be suppressed instead of uplifted, during these disruptive and politically charged times.

Having delayed our AGM and extended our Board term due to COVID-19 restrictions, we experienced resignations on SYP Board, leaving me as the only female voice left on the team. My colleagues did all they could to ensure I was able to speak my mind freely, but as a woman in a male-dominated environment, it can be easy to revert back to the misogyny you’ve internalised and consumed from everyday society. I have learnt to recognise these habits in myself, and with the support of my peers I can combat them, but not every woman has this strong support system within their organisations or workplaces, particularly within political spheres. When this goes unaddressed, women risk losing their voices altogether, and progress that their professional settings have made by amplifying female colleagues swiftly backtracks.

With less opportunities for women to raise concerns in a safe, in-person environment, it is now more imperative than ever for organisations and workplaces to encourage and champion female voices. Women within SYP are making sure we do just that, and the Convenors of our subject committees began discussions around this, drawing up an inclusion statement that be used to train members and staff and increase understanding of the difficulties facing minority groups within these environments, including women and minority genders. After these discussions, a large amount of our male members expressed that they had never been aware of how real an issue this was, and the positivity and empathy following these discussions has been overwhelming.

During the uncertain times of a global pandemic, we should be placing equality at the forefront of every professional setting, and stand behind all the incredible women- the doctors, the carers, the teachers, the volunteers- who have played their part in guiding us through these difficult times.