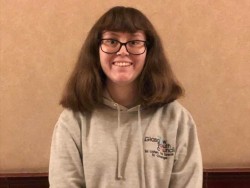 I started becoming worried about COVID-19 when I saw the news reports of hospitals in Italy struggling to cope with the number of patients with COVID-19. My panic was further reinforced by the fact that my Papa was in the hospital due to his foot at the same time that people were starting to panic buy and there were rumours of a lockdown floating about. Me, my Mum and Dad had to start doing my Papa and his wife, Maureen’s shopping for them, as Maureen was told to shield and Papa was in the hospital. The seriousness of the pandemic hit home even more when the day after Papa was released from the hospital, visitors were banned from visiting patients in hospitals. We felt very lucky that Papa had managed to be discharged just before the ban on visitors, as he would've been very lonely in hospital without being allowed anyone to visit.

After Papa was discharged, we continued doing Papa and Maureen’s shopping for them because Maureen had to shield due to her COPD. We would then drop off their weekly shop and video call them on Saturday evenings. It felt awful knowing that we weren't allowed to visit as normal but we accepted it because we wanted to protect them.

Once I had completed all of my university assignments for the academic year, I applied to volunteer for a local charity that matches vulnerable elderly people with a volunteer who calls them once or twice a week, as I wanted to make a positive difference to someone. I know how hard it was for Papa and Maureen to shield even with regular video calls from me, Mum and Dad and other family members. To know that there are vulnerable people without anyone at all to chat to broke my heart and I wanted to volunteer as it sounded rewarding. I've been in contact with my match and it’s so satisfying to know I'm helping make a small difference. I've also organised virtual events for the charity, and it's been great seeing the clients become pals with each other and grow in confidence using technology.

I've spent a lot of time using video calls to interact with family, friends, attend uni and meetings. If lockdowns mean that people won't die of a deadly virus, then I’m more than happy to play my part in protecting people by staying at home. It's a challenging time, but people need to adhere to the rules otherwise we’ll be living with COVID-19 for a lot longer.