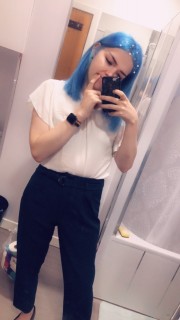 Since I was born I feel like my life has been on pause, I had to spend 7 years trying to get by in primary school and a further 6 years in high school, I loved both of my schools but throughout my combined 13 years in school I felt like a fraud, I didn’t feel like *Deadname* Quigley and I hated that name, I loved being C-Jay Quigley. At the time I didn’t know who C-Jay was, I just knew it was who I wanted to be.

I thought once I had left school, I’d finally get to live my life. Free from the worries of being bullied but once again I felt as if my life had been put on pause. Because as much as I was free to be who I wanted to be, I still had to go through, what turned out to be, a 6-year transition.

If you haven’t guessed from context, I’ll introduce myself, Hi, I’m C-Jay Quigley, I am a transwoman, which means I was assigned male at birth but realised in high school that I was actually a woman.

This transition was a lot tougher than I had thought, the physical, mental and emotional toll it had on me was something I had never expected. I had lost people who I considered friends because of their ignorance. But even the ones that stood by me, their lives progressed, they got in relationships and even engaged, they passed college and university, got amazing jobs and houses while I still felt like my life was on pause. I felt like all the friends I had were now at different stages of their lives.

I was 6 months after having the toughest operation I have ever had and I felt like I missed my chance to have a normal life, I was on the brink of suicide. And suddenly I felt like finally I had a guardian angel looking over me as I got the chance to go on a trip with my local youth council, where I met my now flatmate and one of my best friends Emily who helped me finally have a normal life. Granted it was a few years late, but I got to do all the things you are supposed to when you first leave school. I got to go to Freshers, I got to move in with a friend, I got to have a group of girl friends who were there for me. I got to be the girl I finally wanted to be, and I felt like someone hit play on my life for once. I had hopes for the future. Going to see Camilla Cabello, All Time Low and going on holiday with my new friends.

Then the dreaded COVID-19 hit and I felt like once again someone pressed pause on my life. My concerts were cancelled, the idea of going on holiday was cancelled and my hopes of having a normal life were put on hold once again and we don’t know when it could end.