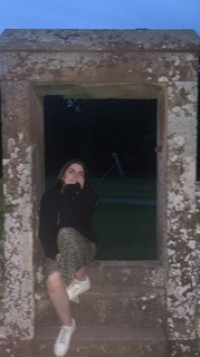 Comparison isn’t objectively bad, but it’s dangerous when used for the less tangible things - like how your life’s going. I graduated in 2019, hungover from three years in art school and forced to confront my total cluelessness re: what I wanted to do with myself. I dealt with this by shelving any desire to start my career yet, and ran off to live in Italy – procrastinazione! On Valentine’s Day, I’d chopped the last threads of the abusive relationship I’d been in. I carpe diem-ed in 2019 more than I ever had before, because I was finally able to. I got butterflies every time I looked at myself in the mirror. It was bizarre and wonderful.

Next to a year like that, 2020 has been…different. I moved back from Italy in December and back to my parents’ in Annan. Trash-talking your hometown is tacky but Annan was a far-cry from Florence. A lot of my memories there weren’t very fond ones (see: previous abusive relationship) and returning there felt like I’d gone backwards. I cried quite a lot and was persistently gloomy – and that was before the pandemic.

I began 2020 on Universal Credit, and at the start of February I’d gotten a job in retail. One month in, I was made redundant. Naïvely, claiming benefits and redundancy weren’t things I’d ever expected for myself; you’re misled throughout your education to believe that once you’ve been to university you’ll be on an upwards socioeconomic trajectory. I was unemployed for 4 days before starting a new job in a local factory, producing PPE for the NHS. In May, I was offered a freelance role working with an arts organisation I’d volunteered for in the past. I took that on alongside my factory job and burned through the worst of lockdown by working A LOT.

I wasn’t immune to the pleasure and curse of having lots of time to think. On a bad day, I’d be sitting at a sewing machine at 7 in the morning trying to flick a very stiff ‘off’ switch on the mental picture show of past traumas that for some reason decided to play in my head that day. On a good day, I’d take in how good my lunch tasted, or think about what I actually wanted to do with my life in a way that felt day-dreamy and exciting rather than utterly terrifying.

Those bad days felt consuming at the time, but the good days have shaped the real outcome of this year for me. It’s been a strange and rare opportunity to troubleshoot myself. I’ve paid off my debts and saved. I’ve finally moved back to Glasgow – months later than I’d planned, but financially stable and with actual GOALS. I’ve got a better idea of what kind of career I’d like to pursue, and learned from seeing others struggle that this career really shouldn’t be what defines me because everything is so much more precarious than we realised. The pressure is off, and yet I’m moving forward more than ever. I’ve even started seeing a therapist, which is huge for me!

2020, compared to 2019, has been different. It’s forced me to face myself in unfamiliar ways. It’s given me a motivation which I didn’t know I could have. I’m lucky – I feel guilty even having the privilege to view this year as one that’s given me the space and time to grow, when other people have lost loved ones. I’m not alone in using this year to re-evaluate my life in ways I haven’t previously though, and I hope this weird, life-changing, ‘unprecedented’ time has at least made us able to slow down and look after ourselves a little more than we used to.