The SWC are using many new ways to get more women's voices heard. This new section of the website will contain blogs from women about topics that affect them.

Please give careful consideration to these voices being respected for their own views before leaving comments, thankyou.

16 Days of Action on Violence Against Women and Girls

From 25 November, the International Day for the Elimination of Violence against Women, to 10 December, Human Rights Day, the 16 Days of Activism against Gender-Based Violence Campaign is a time to galvanize action to end violence against women and girls around the world.

Women and Girls in Sport Week 2017

Scottish Women and Girls in Sport Week runs from 1 to 8 October with a programme of activity to encourage more women into sport and physical activity, raise awareness of those regularly taking part at all levels, and address the barriers that lead to lower activity rates among women.

The five fastest growing sports for girls in Scotland have been revealed in new statistics to mark the start of Women and Girls in Sport Week.

The top three sports by total participation sessions are netball, football and gymnastics, according to data collected from the Active Schools programme.

To share women's stories from different sports in Scotland the SWC asked two young women, one from a martial arts and one from wheelchair basketball, what their journey's were into sport and what it means to them.

This is Lynn's Blog on the new regulations for the Carers Scotland Act 2016;

Lynn Williams is an unpaid carer for her husband Derek, who has a high lesion spinal injury.

Lynn has campaigned for a number of years on the issues affecting unpaid carers, working first with Carers Trust. She joined SCVO in 2012 as a Policy Officer with welfare reform as a major part of her remit. At this time, she was asked by then Deputy First Minister to join the Expert Working Group on Welfare and served through both phases of the group's work.

Alongside her full time caring role, Lynn also works on a very part time basis with GCVS on health and care integration. She is a Carers Allowance claimant and she and her husband are currently dealing with the DLA to PIP transfer. 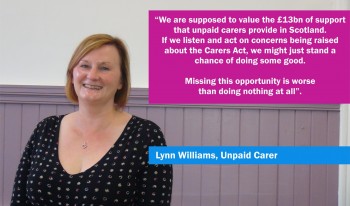